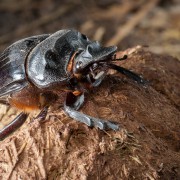 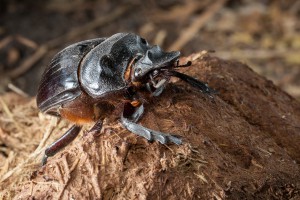 A nature tiny wonder, a perfect machine with sun (and stars too) bearing capabilities.

Dung beetles are beetles that feed partly or exclusively on feces. All the species belong to the superfamily Scarabaeoidea; most of them to the subfamilies Scarabaeinae and Aphodiinae of the family Scarabaeidae (scarab beetles). As most species of Scarabaeinae feed exclusively on feces, that subfamily is often dubbed true dung beetles. There are dung-feeding beetles which belong to other families, such as the Geotrupidae (the earth-boring dung beetle). The Scarabaeinae alone comprises more than 5,000 species.

Dung beetles are currently the only insect known to navigate and orient themselves using the Milky Way. (Source:Wikipedia)