Moremi Game Reserve, Botswana. Dawn of April 24. I’m still trying to force caffeine to properly circulate trough my veins. Air is cold, too cold for the image of Africa i’ve got from books. As you’re not allowed to leave camps before daylight during safaris we must wait for it before moving. I’t been 1 or 2 minutes since we left the camp. I got my 5d mkII with the Sigma 150-500 in one hand (doing biceps early in the morning) and i’m adjusting my trusted mimetic kefiah with the other hand. Suddenly our guide stops the vehicle. Air is still (cold and still). Light is pervaded by a cold violet shade. From the bush, she cross the white road and start coming toward our Jeep. Member of the Felidae family, it is listed as “Near Threatened” on the IUCN Red List mainly because of habitat loss and fragmentation, and hunting for trade and pest control. The Leopard success in the wild is mainly due to its opportunistic hunting behavior, its adaptability to habitats, its ability to run at speeds approaching 58 kilometres per hour, its unequaled ability to climb trees even when carrying a heavy carcass, and its notorious ability for stealth. The leopard consumes virtually any animal that it can hunt down and catch. Its habitat ranges from rainforest to desert terrains. (Source: Wikipedia for details). I think it’s been one of the longest moments of my life. Staying still, looking at her coming at us, 3/4 meters away, since the second vehicle came distracting her and making her decide to turn back into the bush. 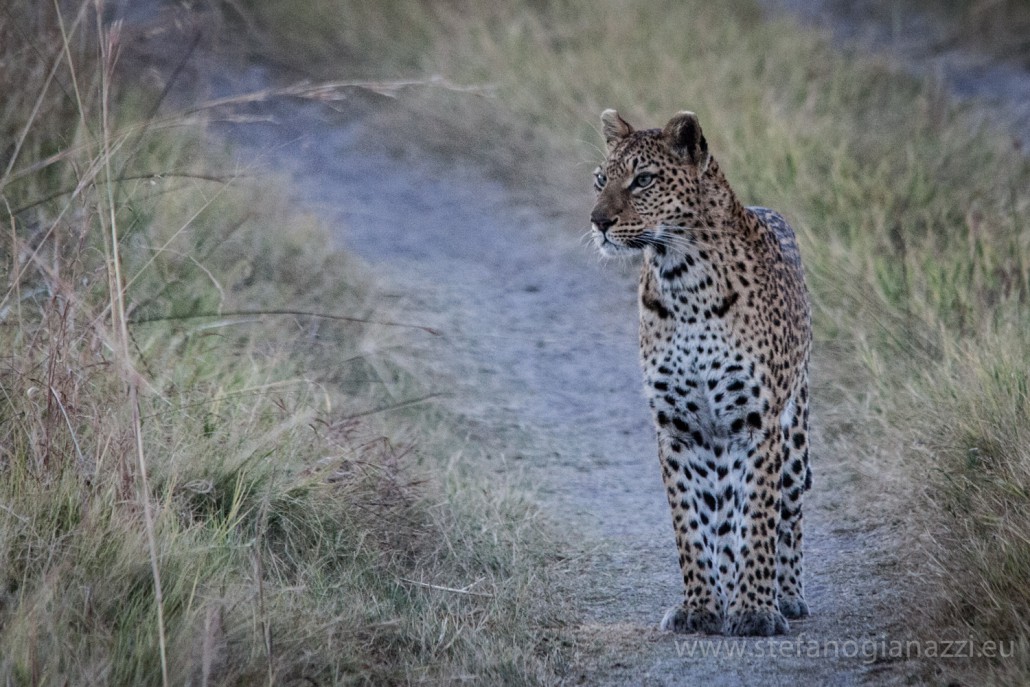